To share your memory on the wall of Andrew Talhelm, sign in using one of the following options:

We encourage you to share your most beloved memories of Andrew here, so that the family and other loved ones can always see it. You can upload cherished photographs, or share your favorite stories, and can even comment on those shared by others.

Posted Jan 04, 2021 at 08:15pm
He was my teacher when I was in the junior high he was my favorite teacher he wasn’t harsh on his students or anything I’m praying for his family
Comment Share
Share via:
MI

Posted Dec 27, 2020 at 06:13am
I just heard this tragic news this morning. Andy and his entire family were most dear to me in my most formative years. I’m so sorry to hear this news. All my love to him and his family.
Comment Share
Share via:

Posted Dec 23, 2020 at 02:49pm
Andy and I have so many memories together from our days at church camp in Pineville. I know together we drove many adults insane down there trying to keep tabs on the two of us. He had a one of a kind sense of humor and he will be missed.
Comment Share
Share via: 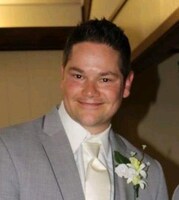