To share your memory on the wall of Dudley Boone, sign in using one of the following options:

Family has requested that mask is required at all times.

We encourage you to share your most beloved memories of Dudley here, so that the family and other loved ones can always see it. You can upload cherished photographs, or share your favorite stories, and can even comment on those shared by others.

Jeff, David, Leann, &Annie Carlson, Dr. Rochon, Crystal, and Renee, and other have sent flowers to the family of Dudley Joseph Boone Sr.
Show you care by sending flowers

Posted Jan 12, 2021 at 07:49pm
We are so saddened to hear of Mr. Dudley's passing. I knew him most of my life and always enjoyed a good conversation with him. You are all in our prayers.
Comment Share
Share via:
SD

Flowers were purchased for the family of Dudley Boone. Send Flowers

Posted Jan 11, 2021 at 05:59pm
I know "Poppa" will be greatly missed. Prayers for strength and peace for you as God covers you with His love. Jesus loves y'all, me too. 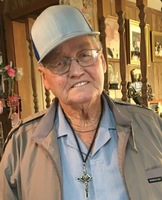