To share your memory on the wall of Harold Leger, sign in using one of the following options:

We encourage you to share your most beloved memories of Harold here, so that the family and other loved ones can always see it. You can upload cherished photographs, or share your favorite stories, and can even comment on those shared by others.

Posted Jan 21, 2021 at 04:41pm
I'm writing for my husband; I know he will miss all the stories you used to tell, he would come home and tell me and we would laugh about it!! He will miss all the afternoons on the porch drinking a beer and just visiting with you... everyday I didnt have to ask, I knew where he was at and it warmed my heart to know that he enjoyed your company so much!! You will be missed greatly!! Rest in peace, we love you!! -- Amber 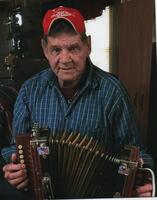