To share your memory on the wall of Gladys Colomb, sign in using one of the following options:

We encourage you to share your most beloved memories of Gladys here, so that the family and other loved ones can always see it. You can upload cherished photographs, or share your favorite stories, and can even comment on those shared by others.

Yolanda (Alexander) Trahan, Keith & Jacquelyn Young, and other have sent flowers to the family of Gladys Henry "Mrs. Ann" Colomb.
Show you care by sending flowers

Posted Feb 12, 2021 at 12:15am
My heartfelt prayers and sincerest condolences go out to the Henry and Colomb family. Mrs. Ann will be missed, but our memories of her will live on.

Keith & Jacquelyn Young purchased the Your Light Shines for the family of Gladys Colomb. Send Flowers

Your Star Family purchased flowers for the family of Gladys Colomb. Send Flowers

Posted Feb 09, 2021 at 07:21pm
My oldest sister has passed on and for 63 years I never knew her name was Gladys. We all were given nick names as right of passage. Love you big sis ( Mooney) lol.
Comment Share
Share via: 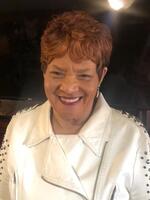