To share your memory on the wall of Thelma Quebodeaux, sign in using one of the following options:

We encourage you to share your most beloved memories of Thelma here, so that the family and other loved ones can always see it. You can upload cherished photographs, or share your favorite stories, and can even comment on those shared by others.

Posted Feb 20, 2021 at 06:54pm
To Thelma Quebodeaux Family,
It's a small world. If only we would have known that Thelma was living in Houston and going to the same church.
History: Genevieve came to Houston in 1941 to help take care of me, DOB 5/18/41. Verna Mae came a little later and both of them stayed at our home in Houston. We met Thelma when she moved to Houston. Stayed in touch with Genny until her death in CA.
My parents and I attended Genny and Ed's wedding at St. Anne's church, Houston, TX, where I was also married. My parents lived in Bellaire, TX when Genny and Ed had a home in Bellaire. We saw some of their girls when they were young and before they moved to CA. Visited with Genny at her home in CA on a stopover in 1964. She called me on the eve of my wedding in 1971.
We were blessed to have the Quebodeaux Gals in our family. Would have loved to have stayed in touch with Thelma, had we known. We don't live far from Flour and we attend St. Michael's church also.
Our sympathy.
Jackie Fritz Schoppe and Joe Schoppe
Comment Share
Share via:
CC

Posted Feb 12, 2021 at 11:10pm
I’m afraid I never had the pleasure of meeting Aunt Chim heard many great things about her RIP Aunt Chim
Comment Share
Share via: 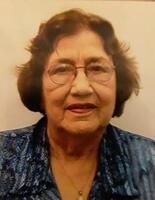