To share your memory on the wall of Samuel Dunbar, sign in using one of the following options:

We encourage you to share your most beloved memories of Samuel here, so that the family and other loved ones can always see it. You can upload cherished photographs, or share your favorite stories, and can even comment on those shared by others.

Posted Nov 21, 2020 at 01:11pm
SENDING OUR PRAYERS AND SYMPATHY TO THE DUNBAR FAMILY. REST IN PEACE SAMMY AND MAY HIS ETERNAL LIGHT SHINE UPON YOU MAC & CONNIE FIGUERON AND JOE RICHARD AND YOUR WOODMEN FAMILY
Comment Share
Share via:
DM

Posted Nov 20, 2020 at 08:54pm
Mr. Sammy,
Thank you so much for making me a part of your family all these years. I was often the tag alonger for many countless band trips, sleepovers, and family holidays. You raised a wonderful son and daughter & had a beautiful life with your wife. Rest now, all of your work is done. I will miss you, and I love you.
-Devonie
Comment Share
Share via: 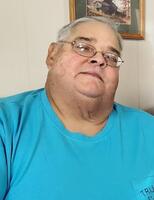